Reprinted with permission of Everette and Jean Barefoot.

Proper curing and aging of real country hams is truly a Southern art. Whether salt-cured, aged in sugar and salt or smoked, the high quality hams of North Carolina have come to be regarded as some of the finest in the nation.

For many years in the area of hearty farmland near Johnston County in eastern Carolina, the neighborly invitation from Jean and Everette Barefoot to their friends to “come on over for ham and eggs” was a welcomed treat not to be refused. Everette Barefoot had long been known for his deliciously-aged hams, though he only processed a number of hams sufficient for his own family and a few select friends and relatives at Christmas time.

Folks telephoning from far away often requested Jean Barefoot’s expertise in advising them of the real “Southern” method for cooking these hams. Following are a few of her hints for preparing a NC Country ham. 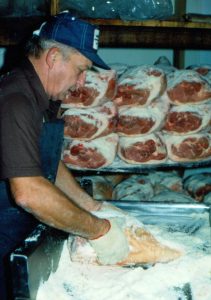 To Bake the Ham: For Sunday dinners or holiday meals, whole hams are baked and sometimes garnished with cloves, pineapples, cherries and brown sugar. There are many ways to bake a country ham, though it is necessary to soak the salt-cured ham for 12 hours prior to baking in order to remove the salt. Simply soak the ham in water overnight before baking. (Extra aged hams which have been cured for 12 months or more can require as much as 48 hours in water.)

After soaking, scrub the ham well, place it skin-side up in a deep roasting pan and fill the pan at least half-way with water, wine, ginger ale or champagne. Cover tightly and place in a 300 degree oven. Never let the ham boil, but simply simmer it slowly instead. If you use a meat thermometer, remove the ham when the thermometer reaches 160 degrees. If you don’t use a thermometer, you can always tell that the ham is done when the aitch (hip) bone becomes loose! After removing from the oven, let the ham cool slightly and and remove skin before slicing. Cooking requires about 25 minutes per pound.

Another traditional method of baking a country ham includes an overnight soaking in water plus one cup of dark molasses.  (Be sure to cut both ends off and remove any edges which seem exceptionally hard from the curing process prior to soaking the ham.) After the ham has soaked for at least 12 hours, pour off the water, then cover again with an additional one cup of molasses and water and bring to a boil on the stove. Then, return to a very slow boil until thick blisters appear on the ham. Cooking requires about 25 minutes per pound.  Once more, let the ham sit in the same water and molasses another night. Before serving, pour off the water, trim the crust, and cover the fatty side in brown sugar before browning in the oven. This is the traditional “grandma’s way” of baking country ham. 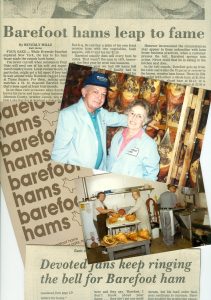 The final recipe for baking a whole ham requires soaking the ham in water for 24 hours. After soaking, scrub the ham with a soft brush. Remove the “shank” end and place the ham in a covered roaster with seven cups of water. After preheating the oven to 500 degrees, bake the ham for fifteen minutes. Then, turn off the oven and leave the ham inside for three hours. Again, preheat the oven to 500 degrees and cook again for 15 minutes. Turn off the oven and let the ham remain for for eight hours. IMPORTANT! Do not open your oven door at all for the total eleven hours. Once you’ve aged as much as your ham in cooking it this way, remove the ham from the broth and let it cool. You may slice as is or you can remove the skin before slicing. Garnish with brown sugar, spices, etc. and brown slightly in the oven. You’ll be delightfully surprised at the wonderful flavor.