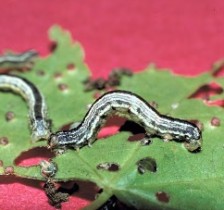 Thanks to the NC Forest Service for this information:

There are two species of cankerworms in North Carolina: the spring cankerworm and the fall cankerworm. Although both species are similar in behavior and appearance, their names indicate the time of year adult moths emerge and when eggs are laid. Cankerworm larvae are important defoliators of many hardwood tree species. Complete defoliation commonly occurs during severe infestations, resulting in growth loss, decline, or even mortality. These insects are also considered to be a serious nuisance because of the impact they have on the appearance of landscape trees, their tendency to drop or dangle from trees on a silken strand, and the accumulation of frass below infested trees. Cankerworms are just a few species of insects commonly referred to as inchworms, loopers, or spanworms whose larvae move by arching their body dramatically to bring their hind legs up to meet their front legs.

Fully grown larvae can be more than an inch long, vary in color from light green to black, and have narrow white or yellow stripes on their sides. Spring cankerworms have only two pairs of prolegs at the end of their abdomen while fall cankerworms have three pairs and a broad dark stripe down their back. Color is highly variable. The larvae crawl in the typical style of an inchworm by moving their rear prolegs up to their front legs on the thorax while arching their back. Younger instars create small holes in the foliage during feeding; later instars consume the entire leaf with the exception of the midrib. Female adult moths are wingless and drab gray to brown. Adult males are light gray or tan with a 11⁄2 inch wingspan. Small oval-shaped eggs are laid in bark crevices (spring cankerworm) or barrel-shaped eggs are laid in flat clusters that may completely surround small branches (fall cankerworms).

Spring cankerworms emerge in early spring, mate, and lay eggs. Fall cankerworms in contrast, emerge in the late fall to mate and lay eggs. The eggs of both species hatch at the time of budbreak of host species. Larvae feed on new and expanding leaves for 6 to 8 weeks, then drop to the ground and burrow into the soil or leaf litter to pupate. Because the adult females lack wings, spread of this forest pest is limited to dispersal of larvae. Early instars may drop to the ground and travel to neighboring trees, or may be carried on the wind by a single silk strand (ballooning).

Infestations can be severe and result in complete defoliation. Healthy trees can recover from an occasional attack, but several consecutive years of defoliation can lead to growth loss, decline, or mortality. Natural predators and parasites tend to keep populations of cankerworms in check, and effectively reduce large populations.

Control is usually not necessary because natural predators and parasites keep populations below unacceptable or seriously damaging levels. Sticky bands can be applied around the stem of susceptible trees to trap females when they emerge from the soil and climb trees to lay eggs. Insecticides are commercially available to protect high value landscape trees. 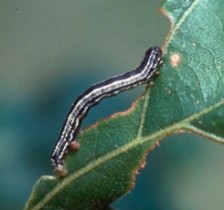 Cankerworms are becoming more of an issue in North Carolina and throughout the Eastern half of North America from Texas to Nova Scotia.