Folks have been buying 100% Broom Corn fiber brooms from Stone Brothers & Byrd for years and years.  From the now unavailable Kitchenette Brooms to the fantastic Airlight Broom, these Made in the USA brooms offer a higher quality of sweeping because of their construction.  But what is Broom Corn?  We turned to the University of Wisconsin Extension office for this article.  Hope you enjoy.  Want to pick up a few brooms for yourself?  Click Here. 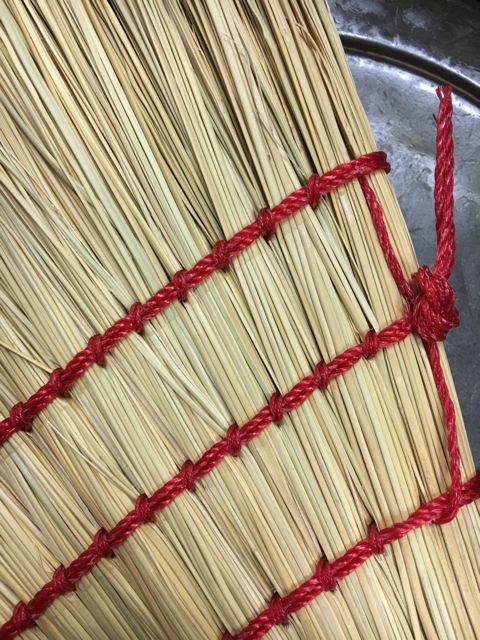 Broomcorn (Sorghum vulgare var. technicum) is a type of sorghum that is used for making brooms and whiskbrooms. It differs from other sorghums in that it produces heads with fibrous seed branches that may be as much as 36 in. long.

Although the origin of broomcorn is obscure, sorghum apparently originated in central Africa. Production of this crop then spread to the Mediterranean, where people used long-branched sorghum panicles for making brooms in the Dark Ages. Broomcorn may have evolved as a result of repeated selection of seed from heads that had the longest panicle branches. The broomcorn plant was first described in Italy in the late 1500s. Benjamin Franklin is credited with introducing broomcorn to the United States in the early 1700s. Initially, broomcorn was grown only as a garden crop for use in the home. By 1834 commercial broomcorn production had spread to several states in the Northeast and started moving west. Illinois was the leading producer of broomcorn in the 1860s, but production of the crop in that state virtually ceased in 1967. Some production has occurred in Wisconsin since 1948.

Domestic broomcorn acreage is low because of the limited demand for the crop and its vast labor requirements, particularly for harvesting. In the early 1970s, approximately 100,000 acres of broomcorn were harvested in the United States annually, with the highest acreages in Oklahoma, Texas, New Mexico and Colorado. It is also produced in Illinois and Iowa. Half of the domestic needs for broomcorn are imported from Mexico.

The long fibrous panicle of the broomcorn plant is used for making brooms. A ton of broomcorn brush makes 80 to 100 dozen brooms. High-quality broomcorn brush is pea-green in color and free from discolorations. The fibers should be straight, smooth, pliable, and approximately 20 in. long. Brush that is overripe, reddened, bleached, crooked, coarse or flat is considered poor quality.

The stalks are of very little value for forage. The mature seed is similar to oat in feed value.

Broomcorn is a coarse annual grass that grows 6 to 15 ft tall. It has woody stalks with dry pith and 8 to 15 nodes and leaves above the ground. The upper internode, or peduncle, is 8 to 18 in. long and topped by a series of closely compressed panicle nodes from which the fibers develop. The fibers, usually 12 to 24 in. long, are branched toward the tip, and the flowers and seeds are borne at the tips of the small branches. The seeds are brown, broadly boat-shaped and enclosed in tan, reddish tan or brown, pubescent glumes. The glumes generally remain on the mature seeds, and 30,000 seeds weigh approximately one pound.

Broomcorn can be grown in practically every state. It will produce a fair quality of brush wherever the temperatures are high enough for com to grow well. Like other sorghums, it is relatively tolerant of heat, drought and poor culture. The best brush, however, is produced where the summers are warm and the soils are moist and fertile. Annual rainfall of 15 to 32 in. is adequate. Poor soils and extremely cool or dry weather result in inferior brush.

Broomcorn does best in warm, fertile soils. Deep alluvial soils usually produce brush of higher yield and quality than shallower soils. The crop can be grown on rich bottom lands or sandy uplands.

In the Midwest, the land is usually plowed, double-disked and then harrowed prior to planting broomcorn.

Broomcorn is usually planted between May 1 and June 15.

C. Method and Rate of Seeding:

Nutrient requirements for most sorghums include 60 to 120 lb/acre of nitrogen, depending on soil organic matter level, and 30 lb/acre each of phosphate (P2O5) and potash (K2O) at medium soil test levels. Animal manure or a balanced commercial fertilizer can be applied. A soil pH of 6.0 to 6.5 may result in highest yields.

The varieties of broomcorn grown in the United States can be divided into three groups: Standard, Western Dwarf and Whisk Dwarf. Standard broomcorn varieties usually grow 6 to 15 ft tall. They bear a brush 16 to 36 in. long. The “handle” or stem of the brush is at least 8 in. long and is cut at harvest. Evergreen, Black Spanish (Black Jap) and California Golden are varieties of standard broomcorn.

Western Dwarf broomcorn varieties usually grow 4 to 7 ft. The brush (15 to 24 in. long) is weakly attached to the stalk and can be pulled or jerked off at harvest time without cutting. About one-half to two-thirds of the length of the brush is covered by the “boot,” or upper leaf sheath, at harvest. The Western Dwarf broomcorn varieties, including Evergreen Dwarf, Scarborough and Black Spanish Dwarf, are grown in the semiarid western areas.

Whisk Dwarf broomcorn usually grows to a height of 2 1/2 to 4 ft and produces a fine slender brush about 12 to 18 in. in length. The stem is easily detached from the stalk, and the brush is harvested by pulling or jerking. Whisk Dwarf is used for making whisk brooms and for the insides of floor brooms. The only variety of Whisk Dwarf grown in this country is Jap or Whisk Dwarf.

Weeds are controlled by cultivation until the broomcorn plants are large enough to compete with the weeds.

G. Diseases and Their Control:

All varieties of broomcorn appear to be susceptible to fungal smut (Sphacelotheca sorghi), which destroys the seed heads. Another disease, Sorghum rust (Puccinia purpurea), attacks the leaves of broomcorn but does not cause appreciable damage or loss.

Sorghum crops are subject to a number of other diseases that can be limiting, especially in wet climates. These include fungi that cause foliage blights and stalk rots. Rotations help reduce their severity and keep them under control.

H. Insects and Other Predators and Their Control:

Broomcorn brush turns from pale yellow to light green before maturity. It should be harvested when the entire brush is green from the tip down to the base of the peduncle. The fibers will be weak at the bottom if they are harvested while the lower ends are still yellow. The brush often begins to redden and become less flexible about 4 or 5 days after the proper stage for harvesting.

Tall standard broomcorn is “tabled” to allow some drying before it is removed from the field. The tabler walks backward between two rows and breaks the stalks diagonally across each other to form a “table” out of the two rows that is 2 to 3 ft high. The brush is then cut, pulled out of the boot, or leaf sheath, and placed on the “table” to dry for a short time (less than 24 hours). The brush is transferred to a curing shed.

The heads of dwarf varieties are jerked or pulled from the stalks and allowed to dry for a day in bunches on the ground or between the stalks before they are hauled from the field.

Broomcorn may be threshed either before or after curing. However, threshing before curing results in better quality brush because the fine branches are less likely to be knocked off when the brush is still moist and flexible.

The highest quality broomcorn is cured in 4 to 6 in. layers on slats in sheds. Curing requires 10 to 20 days, after which the broomcorn is baled. Bales weigh about 330 pounds each.